SWIEQI, Malta, Dec. 3, 2021 /PRNewswire/ — Following on from the club’s initiatives last year, Reading FC will change their goal nets from the traditional white to rainbow coloured once again, in support of the Stonewall Rainbow Laces campaign. The change will take place this weekend during the men’s home game against Hull City on the 4th December. 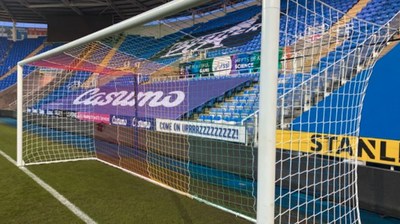 They will also be used as Reading FC Women take on Chelsea, a match which will be broadcast live on Sky on the 11th December.

The initiative, which is in collaboration with official partners Casumo, will also see the online gaming company drop their traditional logo from the sponsorship hoarding, replacing it with their Casumo Cares logo – that of a red heart.

Mark Strijbosch, Sports Marketing Communications Specialist at Casumo, said: We are delighted to support the Stonewall Rainbow Laces initiative for a second year and proud to be part of the continued drive to increase awareness around the topic of inclusion in football.”

Tim Kilpatrick, head of partnerships at Reading echoed the above statement, adding “We are proud to work with Casumo again in supporting Stonewall’s Rainbow Laces campaign. Football is for everyone and we are lucky to join forces with brilliant partners, like Casumo, who share our belief in inclusivity and diversity.”

Veljko Paunović, Reading FC manager, is proud of the efforts too, stating: “Football is a game, more than a game to so many – a way of life! And the spirit of football transcends the barriers that so often separate us – instead the sport we all live and breathe embraces differences in people and brings us all closer together as one community.

“As a sport, it is here for everyone to enjoy, inclusive in its very nature. And it has to continue to be open and accessible to all.

“That is why supporters, players, coaches and clubs across the country continue to support fantastic campaigns like Rainbow Laces every season. And I am proud to be part of a football family that aims to strengthen the bonds that bind us and break down any barriers that stand in our way.”

The club’s rainbow goal nets made their debut during last season’s home clash against Nottingham Forest and became the first ever league club to change their goal nets to rainbow themed ones. Reading went on to win the game 2-0 last November, and the nets will be seen as a good omen should the Royals go on to do the business at the weekend again. That match was also shown live on Sky and with a 2,000 stadium attendance following an alteration to the regulations around the pandemic last season.

Award winning online casino, Casumo, is one of the most distinctive and innovative online casino and sports betting operators in Europe. Founded in Sweden in 2012, it’s mission has always been to design, improve, reinvent and shape the future of online gaming.

The Casumo Group has a selection of online casinos including flagship brand Casumo, Dunder, Kazoom and Casino Secret, and a sportsbook, Casumo Sports.

Casumo hold licences in both Malta and the United Kingdom, delivering innovative online gaming products in a safe and secure environment. It’s operations are located in Malta, Barcelona and Gibraltar.