For Chinese tennis player Zhu Lin, who made her Grand Slam debut in the 2014 U.S. Open, the second-round spell had been haunting her for years until this year’s Australian Open. 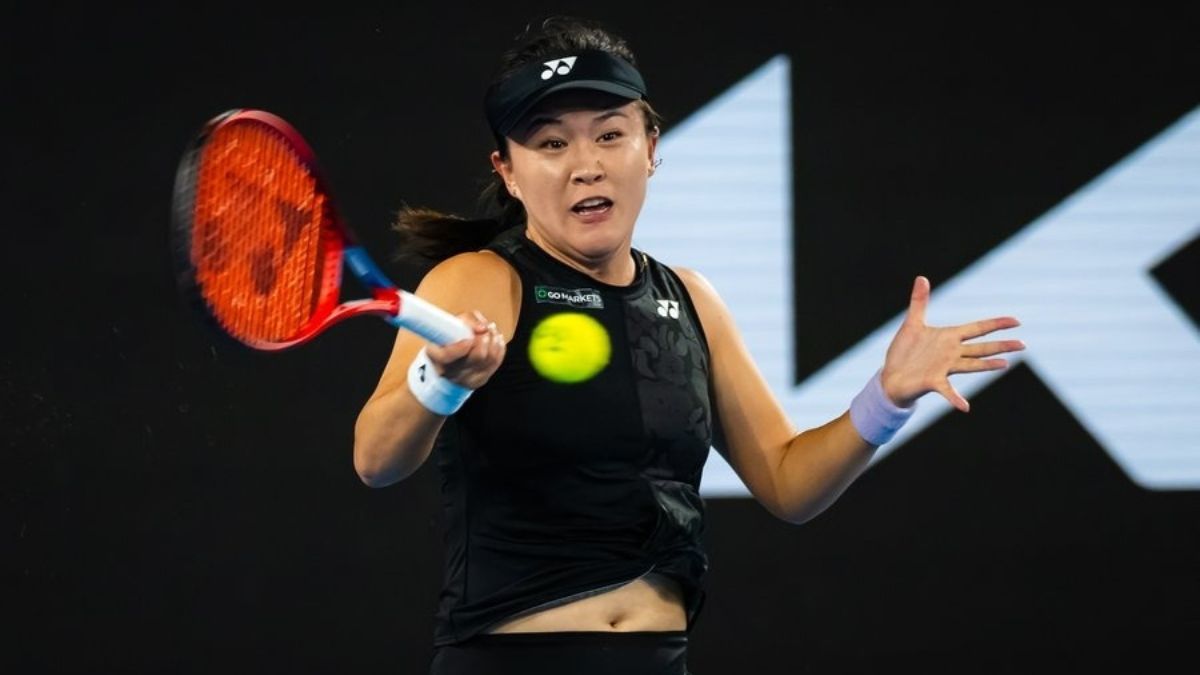 For Chinese tennis player Zhu Lin, who made her Grand Slam debut in the 2014 U.S. Open, the second-round spell had been haunting her for years until this year’s Australian Open.

On Sunday evening, Zhu walked onto the centre court of the Rod Laver Arena — the largest venue in Melbourne Park with a capacity of 15,000 seats — for a fourth-round clash against former world No. 1 Victoria Azarenka.

After crashing out of the qualifying campaign 15 times, exiting seven times in the opening round and reaching the round of 64 four times, the 28-year-old Zhu eventually had her first-ever Final 16 moment at a Grand Slam event.

Zhu entered the match as an unseeded underdog with a moderate ranking, compared to her famed Belarusian opponent. But she challenged Azarenka by firing winners unstoppably and scoring points from long rallies.

“It was very physical. There were so many rallies. It was tough for me to figure out how my opponent plays. I watched her playing before, but today I felt like the bullets were coming from every angle,” Azarenka told reporters.

The two-hour, 40-minute physical torture ended with the two-time Australian Open champion edging out Zhu 4-6, 6-1, 6-4. Azarenka was impressed and said on the court that Zhu has the potential to be a Top 20, reports news agency Xinhua.

Over the past week at Melbourne Park, this was not the first time that Zhu surprised tennis lovers.

Nicknamed “Playwright” among her fans, Zhu has a reputation for yielding dramatic results, making people guess whether her match will have a happy ending or finish in a tragedy.

“Of course, I know that nickname. I also know that my fans teased me in a good way, because I can’t stabilize myself during a match and always miss out on critical opportunities,” Zhu said.

“I took that seriously and reflected on the reasons why I lost. I also had my team together to analyze my drawbacks. I think that’s why I can play my good tennis this time,” she added.

The 2023 Australian Open saw Zhu return to Melbourne Park with a steadier performance and mentality.

Facing off the sixth-seeded Greek favourite Maria Sakkari, Zhu survived a two-hour and 33-minute three-set thriller to register her first victory over a top-10 player.

When asked about the recipe for her success over these days, Zhu often underlined confidence as a keyword.

“Now I have more confidence compared to last year, especially after the moment in Guadalajara last year when I played against Kasatkina,” said Zhu. “I lost like 1-6, 2-6, but every game was so close and had lots of rallies. After the match, I asked myself ‘why I cannot believe myself more and play much better tennis’,” she recalled.

Along with “brainwashing” efforts from her team, Zhu kicked off a fearless 2023 season, craving for competing with big names, rather than trapping herself in self-doubt.

At the ASB Classic in Auckland, New Zealand, Zhu came back from 5-3 down in the third set to defeat seven-time Grand Slam singles winner Venus Williams and advanced to the quarterfinals.

At the Margaret Court Arena, World No. 6 Sakkari sensed Zhu’s pumped-up aggressiveness on the court. “She had basically nothing to lose. She was playing free. She was enjoying herself,” said the Greek.

Reviewing her ninth Australian Open, Zhu regarded the process of going toe-to-toe with top players as beneficial to building her confidence.

“I need to get more chances to play against players like this to be able to beat them. For sure, I will play more big tournaments,” she said, adding that building up consistency is what she needs to work on.

“Not just only for one match or one tournament, I need to be more consistent for the whole season,” said Zhu.

On the court, Zhu plays aggressively, but off the court, she always smiles and speaks in a tender voice.

The 28-year-old bore great patience in her daily life, saying that she never frowns at anything that requests her to wait.

Zhu looks at her tennis career in the same light, from her first ITF event in 2009 to the 2023 Australian Open.

In Zhu’s eyes, every person has their own path and their own way of growth. “If you rise to fame at an early age, you need to care about your mental development, to see if you can handle the following attention and spotlight,” she said.

“I think I’m like a bird flying slower than others, but I will eventually reach my destination,” she noted.

Aiming to crack the top 50 and win a WTA title in 2023, the ‘slow bird’ is primed to take off from the Rod Laver Arena.

BCCI, PCB likely to clash over calendar at ACC board meeting