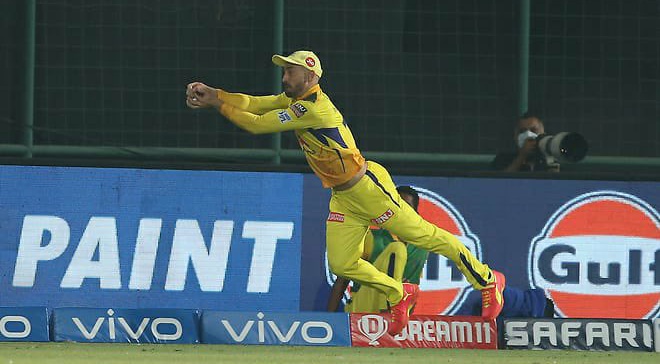 On Wednesday’s match between Sunrisers Hyderabad and Chennai Super Kings at Firoz Shah Kotla, the Sunrisers have won the toss and chose to bat first.

After loosing their key opener Johnny Bairstow early in the match for Sam Curran’s bowling attack, David Warner and Manish Pandey played an impressive 100 run partnership to take the team score past 100 runs and complete individual half centuries as they troubled Chennai bowlers who kept eyeing for a wicket to break the partnership between these two.

Lungi Ngidi was successful in breaking the partnership in the 17th over where he dismissed David Warner with a full wide outside off ball forcing Warner to slice the ball sending it directly to Jadeja for a catch.

After Ngidi broke the partnership, next in line was Manish Pandey who had already started going off, Ngidi bowled a fullish ball around off as Manish Pandey tried to hit hit hard but couldn’t cover the length, Faf Du Plessis ran all the way to take a dive to right and secure the catch.

Faf Du Plessis ran the length of the field for the catch he was still a little short so he decided to dive for it to his right and took yet another “superman catch” for himself.

Make that two! @faf1307 dives full length to his right at long on boundary. Manish falls too. Lungi has his 2nd wicket now. #SRH 138-3 after 18 overs.https://t.co/dvbR7X1Kzc #VIVOIPL #CSKvSRH pic.twitter.com/6VhgLr92II

Faf Du Plessis is famous for his determination on the field when it comes to taking extraordinary catches or making crucial saves for the team, he is known as the superman for some of the catches he has taken so far in IPL which seems extremely unreal and unbelievable. Today he has added yet another moment for cricketing fans across the country to gasp about as he put on the Cape once again for CSK to take Manish Pandey’s catch and dismiss him to land a huge blow to Sunrisers batting.

Chennai Super KingsDavid WarnerFaf du PlessisIPLIPL2021Johnny BairstowM S DhoniManish PandeySRHVSCSKSunrisers Hyderabad
Share
Subscribe to our newsletter
Get your daily dose of Cricket, Football, Tennis & other favorite sports with handpicked stories delivered directly to your inbox.
You can unsubscribe at any time

Charlotte is The Roman Reigns of the Womens Locker Room, Says Tamina