IPL 2021: Find out who have best Economy in death overs (minimum 8 overs)

Jasprit Bumrah made his name on the list of best economy players In Death overs and emerged as India’s no. 1 bowler across all the formats with an economy of 7.92. He has been recorded with the tremendous 115 wickets in 99 matches in his career.
Leading him in this IPL there come to another gem from Hyderabad in the Royal Challengers Bangalore, Mohammed Siraj The highest wicket-taker in the Ranji trophy 41 in just 9 matches. 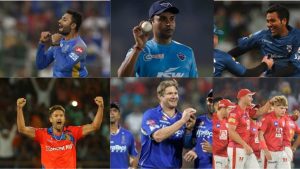 Dwayne Bravo played three seasons for the Mumbai Indians, picked up by CSK in 2011. In his career of 144 matches, he stands up with an economy of 8.5 and 156 wickets. Following Avesh khan, a fast bowler from Madhya Pradesh made his debut for RCB in 2017 and last year moved to Delhi Capitals having a great economy of 9.23 in IPL 2021 and 17 matches in his career with 19 wickets.

2021 IPLAvesh KhanBowlersCricketCSKDelhi CapitalsDwayne BravoEconomyJasprit BumrahMohammad SirajMumbai IndiansRCB
Share
Subscribe to our newsletter
Get your daily dose of Cricket, Football, Tennis & other favorite sports with handpicked stories delivered directly to your inbox.
You can unsubscribe at any time