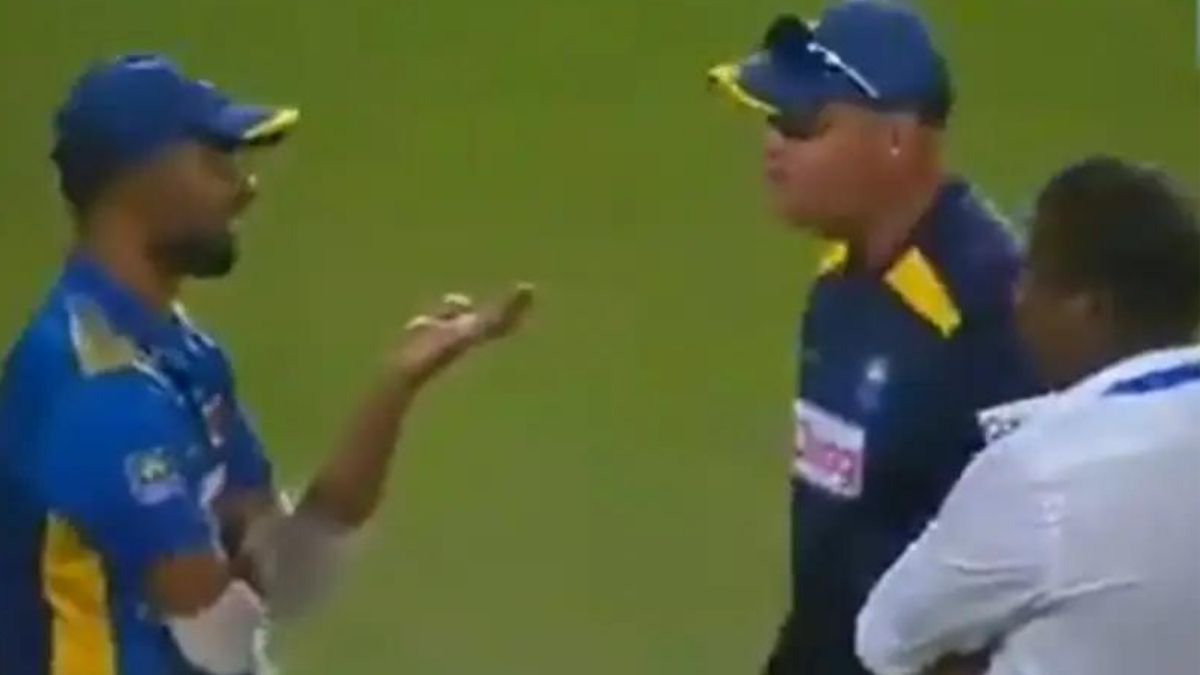 The Sri Lankan cricket legend Muttiah Muralitharan to Mickey Arthur’s Sri Lankan coach, who made animated gestures from the dressing room. This was later followed by a heated argument between Sri Lankan captain Dasun Shanaka and coach Mickey Arthur’s on the field after losing the second ODI to India by 3 wickets in Colombo.

The coach Mickey Arthur’s made some animated gestures from the dressing towards the end of the game. As Deepak Chahar and Bhuvneshwar Kumar stitched together unbroken 84 runs stand to lead India to an unbelievable win in the 2nd ODI against host at Colombo. India has already won three-match ODI series. Sri Lanka will look to win the last to avoid a clean sweep by this young Indian team in this ODI series.

This incident took too much attention after the match as coach Mickey Arthur’s seen arguing with the Sri Lankan captain Dasun Shanaka.

The legendary bowler Muttiah Muralitharan told Mickey Arthur’s should have stayed calm and conveyed his message to the new Sri Lankan captain.

Muttiah Muralitharan said that “I think the coach was acting like, showing himself disappointed and everything, rather just calm down and send some messages”.

The Sri Lankan Coach Mickey’s Arthur has said a justification from his side when Russel Arnold former Sri Lankan cricketer said the coach reaction should not have taken on the field.

Mickey Arthur replied to Arnold’s comment on Twitter saying that “It was a very good debate no need to make mischief out of it”.

Indian team has found themselves in a troubling situation 193 for 7 in the 276-run chase. But it was the 8th wicket stand between Bhuvneshwar Kumar and Deepak Chahar that took India to a win by a very narrow margin.

“Tell the best bowler to the ball and try to take the wicket rather than try to keep them till the end and defend it, it never works like that “.

Muttiah Muralitharan said that “Seven wickets went, one wicket and match would have been sealed but they didn’t know the winning ways, they have forgotten, it is a hard time for Sri Lankan cricket come to winning ways”.

Muttiah Muralitharan also said that “I told you before, Sri Lanka didn’t know the winning ways, they have forgotten the winning ways for the last so many years. It has been tough for them because they have not (known) how to win a match “.

Wanindu Hasaranga the leg spinner who played a major in the Indian batting line-up collapse still had some overs left under his belt. India was struggling in the chase of 276 as they 193 for 7 in 35.1 overs. It was the biggest mistake by Sri Lankan captain Dasun Shanaka keeping him for final overs.

“I have told you before if Sri Lanka takes three wickets in first10-15 overs, India is going to struggle and India struggled. Big effort from (Deepak) Chahar and Bhuvneshwar (Kumar)made them win”.

“If they would have taken one wicket out of Bhuvneshwar or Chahar, with two other tail-enders coming, it would have been tough to chase8-9 runs an over…they made some mistakes but it is an inexperienced side”.

India Cricket teamIndia tour of Sri LankaIndia vs Sri LankaMickey ArthurMuttiah MuralitharanSri lanka cricket teamSri Lanka Legend
Share
Subscribe to our newsletter
Get your daily dose of Cricket, Football, Tennis & other favorite sports with handpicked stories delivered directly to your inbox.
You can unsubscribe at any time