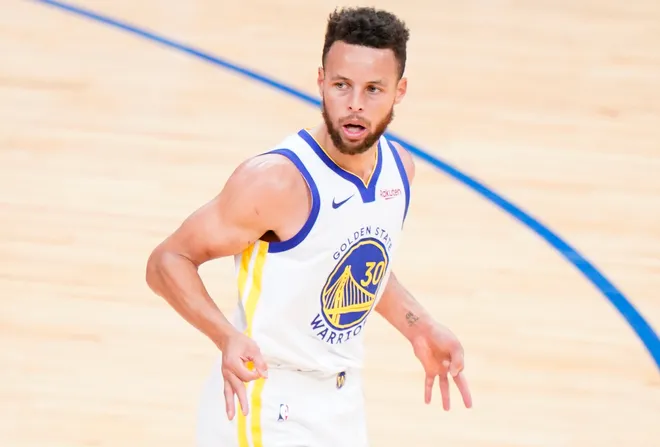 Golden State Warriors continued their winnings streak as they defeated the Philadelphia 76ers 106-97.

The Warriors have been consistently performing since the last 10 games as their star point guard Stephen Curry has been in amazing form with 30+ points in all 10 games against different teams.

In the last 10 games, Curry has scored 72 3-pointers, accounting for more than 35% of his team score in the last ten matches.

Stephen Curry surpassed NBA legend Kobe Bryant on Monday to rewrite the NBA record for the most number of games for a player with 30+ points with 11 games, Kobe previously held the record for 10 games.  According to ESPN. He has taken over the NBA scoring lead at 31.4 points per game, passing Washington’s Bradley Beal’s 31.1.

Steph Curry just overtook Bradley Beal for the NBA's scoring lead in a chase for his second scoring title. They face each other on Wednesday in D.C.
1. Steph Curry: 31.4
2. Bradley Beal: 31.1

“Being aggressive obviously, but kind of letting the game come to you,” Curry told reporters. “And for me, that looks a certain type of way, but I’m having a blast out there just playing basketball.”

Stephen Curry finished with 49 pts tonight in a win vs the 76ers. It was his 5th 40-point game in April.

That passes Kobe Bryant and Michael Jordan for most 40-pt games in a month by a player age-33 or older. pic.twitter.com/JhnrKr24n1

The Warriors now have won five of their six games and stand at the 9th position in the western conference, this has been mainly possible because of Curry’s outstanding performance since the last few games.

The Warriors are now eyeing a playoff confirmation as they have been unable to make it to the playoffs since the last two seasons because of injuries and poor gameplay.

With Stephen Curry in full swing, the Warriors hope for a chance to make it to the playoff this time.

Golden State WarriorsKobe BryantMichael JordanNBAStephen Curry
Share
Subscribe to our newsletter
Get your daily dose of Cricket, Football, Tennis & other favorite sports with handpicked stories delivered directly to your inbox.
You can unsubscribe at any time