Carabao Cup: Chelsea cruise to a 2-0 victory over city rivals Tottenham Hotspur in the semi finals

Chelsea were dominant throughout the match and won it comfortably with a goal by German forward Kai Havertz and an own goal conceded by Spurs defender Ben Davies. 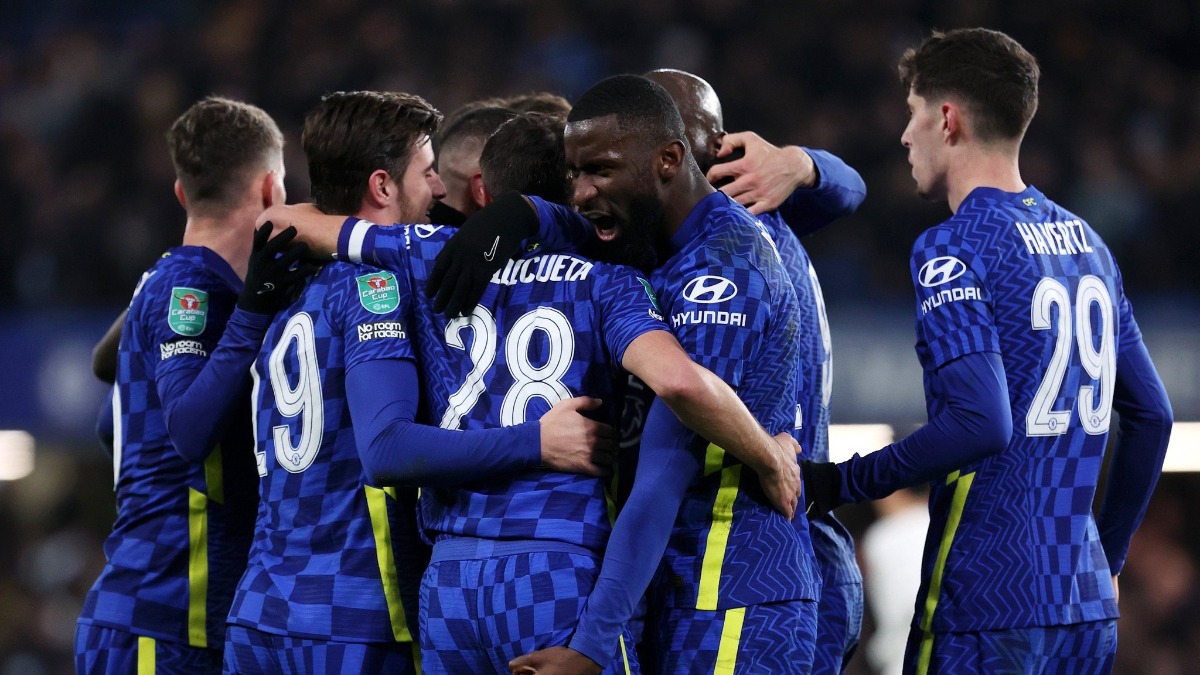 Chelsea seized control of its league cup semi-final against Tottenham Hotspur, beating its London rival 2-0 in the first leg on Wednesday thanks to an early strike by Kai Havertz and an own goal by Spurs defender Ben Davies.

The Blues, which had enough chances to put the tie beyond doubt, swamped the visitors from the start as it sought to book its place in its third final under coach Thomas Tuchel who has yet to mark his first anniversary at Stamford Bridge.

After a mix-up in the Spurs defence in the fifth minute, Havertz fired an angled shot that was goal-bound before it went in off the foot of Davinson Sanchez.

Half an hour later, the dominant host got its second goal, albeit with a slice of luck, when Japhet Tanganga headed away a Hakim Ziyech free kick, only for the ball to rebound into the Spurs net off Davies’ shoulder.

The win, while not as thumping as it could have been, dented the hopes of Spurs, under former Chelsea coach Antonio Conte, of winning a first trophy since lifting the league cup in 2008. In that time, Chelsea has won 12 major trophies including three Premier League and two Champions League titles.

Tuchel restored record signing Romelu Lukaku to the team having dropped him for Sunday’s 2-2 draw with Liverpool as punishment for the Belgian saying in an interview that he was unhappy with his role at Stamford Bridge.

Lukaku went close with a first-half header, created a great chance for Ziyech after the break which the Moroccan wasted and hit an injury-time shot straight at Hugo Lloris.

Chelsea also welcomed back Timo Werner after a period out with COVID-19. On as a substitute for Havertz at halftime, the German striker flashed a shot just wide and then failed to chip Lloris when clean through.

Spurs created a few chances in the second half but the only one that really troubled Chelsea came as late as the 90th minute when Bryan Gil, out wide, cut the ball back to fellow substitute Giovani Lo Celso whose shot was saved by Kepa Arrizabalaga.

Ziyech said he hoped Chelsea would not rue its missed chances to put the tie beyond the reach of Spurs.

“We forgot to finish the game, a lot of chances. Hopefully we get the job done there,” the Moroccan told Sky Sports.

After the match, Conte said the defeat showed how far his current club lag behind his former one.

“From the start Chelsea showed to be much better than us,” the Italian who won the Premier League title with Chelsea in 2017 and the FA Cup a year later, told Sky Sports.

“The first half we struggled a lot, but we know we are talking about one of the best teams in the world, and if you compare it to our team, there is no comparison.

“Today we’ve seen the difference between the two teams. I know the situation, it’s very clear, there is an important gap.”

Conte has enjoyed an encouraging start at Tottenham since arriving in November following the sacking of Nuno Espirito Santo and is unbeaten in his first eight Premier League games.

But the Italian says reaching the next level will require more than just a few January signings.

“We need time and patience. Everyone has to have patience,” Conte said. “Tottenham in the last years, the level has dropped a lot, so now we have to fight to win every game.

“We have to try to fight to stay in a good league position, but if we think we are close, we’re not in the right way.”

The Belgian striker had apologised on Tuesday for saying in a TV interview he was dissatisfied with his role at Stamford Bridge since joining from Inter Milan for a club-record fee of 97.5 million pounds ($132.5 million) in the close season.

He was left out of the squad for the 2-2 Premier League draw with Liverpool at the weekend but Tuchel said he had no qualms about including him against Tottenham.

“I am happy with the performance, I liked how he played,” Tuchel told reporters. “He was strong, involved and showed huge commitment in our defensive work which was important.

“I expected it honestly because Romelu can handle pressure and adversity. He seemed to be relaxed after the decision was made, after we finished our talks, and after he finished his talks. The decision was made and I felt him relaxed enough to have a performance like this.”

Four draws in its last five Premier League games have stalled Chelsea’s title challenge and left it 10 points behind leader Manchester City, so Wednesday’s win was a welcome boost for a Chelsea side hit with injuries and COVID-19 cases.

Defender Thiago Silva and midfielder N’Golo Kante were ruled out on Wednesday after testing positive for COVID-19 and Havertz broke his finger and was substituted at halftime.

It is also without injured fullbacks Reece James and Ben Chilwell, yet still managed to dominate Tottenham.

“I liked this performance. It was far from normal today against Tottenham who are compact and full of confidence,” he said. “We had two last-minute bad news with Thiago (Silva) and N’Golo (Kante) who were both supposed to start.

“We decided yesterday at the last minute to switch to a back four and the guys were very committed, open and focused to play how we played.”

His only regret was that Chelsea did not create a “bigger cushion” for next week’s second leg.

“We created a lot and were very strong because it is so hard to create against Tottenham as we’ve seen in the last few games,” he said. “In the second half, we created a lot, big chances to have a third or fourth goal.

“Everybody knows the game isn’t decided and we have to arrive at full focus and top shape again. We will need another 90 minutes of top-quality football to go through to Wembley.”

The second leg of the semi-final at the Tottenham Hotspur Stadium is due to take place on Jan. 12 and the winners will face either Arsenal or Liverpool.