Ajaz Patel was the third person in history to take all ten wickets in a test innings but this was dampened by his team being reduced to a paltry 62. India are now leading the match by 333 runs. 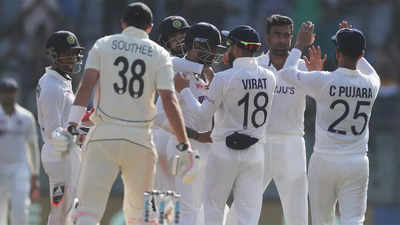 MUMBAI: Mumbai-born New Zealand left-arm spinner Ajaz Patel made Test cricket history with a 10-wicket haul, but Indian spinners made it a forgettable evening for him and his team by dismissing the visitors for a meagre 62, putting India in a strong position to win the series.

India were 69 for no loss in their second innings towards the conclusion of the day, with Virat Kohli opting out of the follow-on in the second and final Test.

Mayank Agarwal remained undefeated on 38 following his magnificent 150 in India’s first innings total of 325. Cheteshwar Pujara, who came out to open in place of an injured Shubman Gill, looked strong throughout his 29 not out.

The hosts’ lead grew to 332 points, and the Indians will prepare for a three-day finish in order to get some rest before boarding the charter trip to Johannesburg on December 16.

The second day of the second Test should have been all about Patel, who finished with numbers of 47.5-12-119-10 to enter the ‘Elite List,’ which includes the late Jim Laker and Indian great Anil Kumble.

Patel must have been elated after bringing India’s first innings total down to a manageable level, but before the happy congratulations on social media could stop pouring in, his players flattered to deceive by batting out only 28.1 overs.

The team finished with the lowest total by an international team on Indian soil.

The Black Caps batted for 14.4 overs less than their primary spinner needed to dismiss all of the Indians.

They didn’t even have time to process the achievement when Mohammed Siraj’s (3/19) hostile four-over spell devastated them. Two of the pitches straightened and had enough speed to get past the batter’s defence, while the other was a vicious bouncer.

On this track, Ravichandran Ashwin (4/8 in 8 overs) and Axar Patel (2/14 in 9.1 overs) were expectedly excellent. The opposing batters were unable to counteract the turn and bounce.

That's Stumps on Day 2 of the 2nd @Paytm #INDvNZ Test in Mumbai!

A superb show with bat & ball from #TeamIndia! 👏 👏

We will be back for the Day 3 action tomorrow.

India vs New Zealand SeriesWankhede
Share
Subscribe to our newsletter
Get your daily dose of Cricket, Football, Tennis & other favorite sports with handpicked stories delivered directly to your inbox.
You can unsubscribe at any time