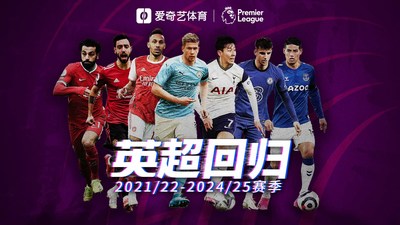 Since its establishment, iQIYI Sports has continued to cultivate the Broadcasting rights to the world’s top football competitions, and has successively reached and maintained in-depth cooperation with world-famous sports organizations such as UEFA, AFC, Premier League, La Liga etc., forming a rich football IP rights matrix of top competitions. With the content layout carefully selected and built, iQIYI Sports has become the first choice of sports video platform for sport fans in China. With the return of the Premier League’s new season, iQIYI Sports will provide more diversified marketing solutions for brand partners from the dimensions of content operation, technological innovation, member service, and commercialization exploration.

In the just concluded Euro 2020, the “Three lions (England National Team)” returned to the final of the international competition for the first time in 55 years in a campaign that ignited the enthusiasm of fans from  all over the world. iQIYI Sports, as the new media broadcasting platform for the Euro 2020, has gathered the largest cohort of football users in China this summer, and has successfully become the go-to sports platform for fans. The success of iQIYI Sports in bringing the Premier League back, right after the Euro 2020, will offer more choices of sports viewing experiences for millions of iQIYI Sports fans.

On the early morning of August 14, Beijing time, the 2021/2022 Premier League season kicks off. During the summer window of 2021, the big clubs in England have invested heavily in signing up world-class star players. In the new season, Liverpool FC, Manchester City FC, Manchester United FC and Chelsea FC are expected to challenge for the Premier League title, with Tottenham Hotspur FC, Arsenal FC, Leicester City FC and Everton FC also expected to be in contention for European competition places.