WWE® Superfans Get Their Very Own Credit Card: The New WWE® Champion Credit Card from Credit One Bank®

LAS VEGAS, June 16, 2021 /PRNewswire/ — Credit One Bank, one of the fastest-growing credit card issuers in the country, announced today the launch of the WWE Champion Credit Card, the first credit card unveiled as part of the multiyear agreement with global entertainment company WWE. The WWE Champion Credit Card gives card members the opportunity to show off their love of WWE while earning cash back rewards on everyday purchases. 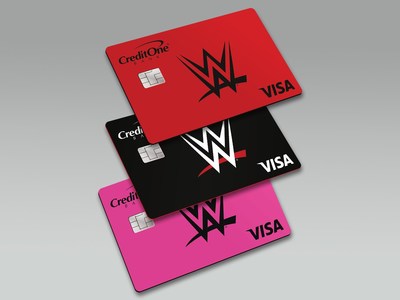 “We’re proud to be launching a product for WWE fans,” said David Herpers, head of product at Credit One Bank. “Helping our customers get more for their money is a tenant of everything we do, and the WWE Champion Credit Card is designed to do that in unique and rewarding ways.”

“WWE has the most passionate fans in the world, and we are proud to give them an opportunity to not only earn cash back rewards but get exclusive opportunities on WWE merchandise and experiences with the new WWE Champion Credit Card from Credit One Bank,” said Stephanie McMahon, WWE Chief Brand Officer.

Credit One Bank and WWE will be working together to provide additional card member benefits specifically tailored for WWE fans.

About WWE
WWE, a publicly traded company (NYSE: WWE), is an integrated media organization and recognized leader in global entertainment. The Company consists of a portfolio of businesses that create and deliver original content 52 weeks a year to a global audience. WWE is committed to family-friendly entertainment on its television programming, pay-per-view, digital media and publishing platforms. WWE’s TV-PG programming can be seen in more than 900 million homes worldwide in 28 languages through world-class distribution partners including NBCUniversal, FOX Sports, BT Sport, Sony India and Rogers. The award-winning WWE Network includes all live pay-per-views, scheduled programming and a massive video-on-demand library and is currently available in more than 180 countries. In the United States, NBCUniversal’s streaming service, Peacock, is the exclusive home to WWE Network. The Company is headquartered in Stamford, Conn., with offices in New York, Los Angeles, Orlando, Dubai, London, Mexico City, Mumbai, Munich, Riyadh, Shanghai, Singapore and Tokyo.

Additional information on WWE (NYSE: WWE) can be found at wwe.com and corporate.wwe.com.