King Corbin Attacks Mcintyre by taking up the offer given by Current WWE Champion. 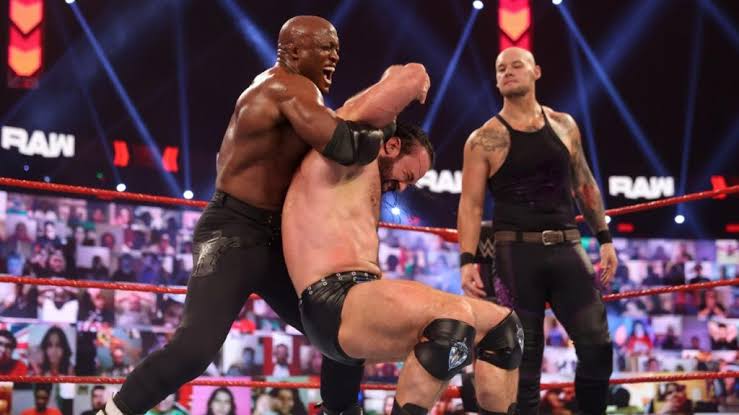 Last week on RAW, Bobby Lashley announced a deal to the RAW roster, asking if any one of them takes out Drew McIntyre before WrestleMania 37, the WWE Champion was ready to give them a shot at the Belt.

But No-one came out from the roster until  the Smackdown Superstar King Corbin took the matter in his hands.

King @BaronCorbinWWE of #SmackDown shocked everyone by showing up on #WWERaw to take out @DMcIntyreWWE! pic.twitter.com/kWnAPj6lOg

Drew McIntyre thought he will be closing this week’s RAW on a high against Ricochet.  But, He was confronted by Mustafa Ali, it didn’t last long as Drew no time to beat him in a singles match.

After the match, McIntyre called out Bobby Lashley and the two men started a brawl, This was the time when Corbin came out of nowhere and beaten Mcintyre up completely. Taking the advantage Lashley also hit Mcintyre with his finishing move “The Dominator”.

The way this Whole Lashley vs Mcintyre feud is going on adding Corbin as another opponent doesn’t seem to be a good idea for the WWE universe as We are already having a triple threat match in the main event where Edge & Daniel Bryan will collide with Current Universal Champion Roman Reigns. Lets see What happens in the next Smackdown Episode this Friday.

Baron CorbinBobby LashleyDrew McintyreWrestleManiaWWE
Share
Subscribe to our newsletter
Get your daily dose of Cricket, Football, Tennis & other favorite sports with handpicked stories delivered directly to your inbox.
You can unsubscribe at any time

Inter Milan drops their new badge, gets mix reaction from the fans