Delhi Capitals fast bowler opened up on how skipper Pant helped him to dismiss Dhoni in the match against CSK in IPL 2021. 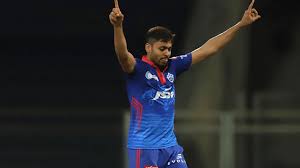 The Indian Premier League (IPL) 2021 saw the rise of uncapped pacer Avesh Khan. The right-arm quick had the campaign to remember for the Delhi Capitals before the tournament came to an unexpected halt. He was the leading wicket-taker of the side as he had 14 scalps with an economy of 7.7. The 24-year-old was also the second bowler on the Purple Cap list.

Avesh came into the limelight right from the opening game against Chennai Super Kings in Mumbai. He was chosen in the absence of Kagiso Rabada and Anrich Nortje and was able to stand out on the expectations by removing MS Dhoni and Faf du Plessis for ducks. He came out with the figures of 2/23.

Before bowling the CSK skipper, Avesh had a chat with Rishabh Pant where he was assisted to bowl by the skipper.

“Only a few overs were left, and Pant knew Dhoni would try to hit out. But he also knew that Dhoni was playing after a gap of four months, and it won’t be easy for him. Pant told me to bowl just short of a length. I did just that. Dhoni tried to hit, but got an inside edge and was bowled,” Avesh told Indian Express.

Avesh KhanChennai Super KingsDC VS CSKDelhi CapitalsFaf du PlessisIPL 2021MS DhoniRishabh Pant
Share
Subscribe to our newsletter
Get your daily dose of Cricket, Football, Tennis & other favorite sports with handpicked stories delivered directly to your inbox.
You can unsubscribe at any time

Shafali Verma to star for Birmingham Franchise in The Hundred