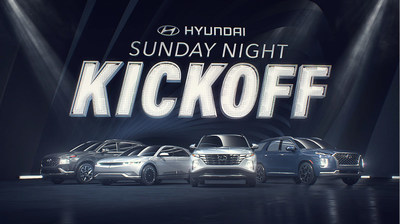 “Evolving the Game” is a three-part series that brings together two all-time football greats, Hall of Fame wide receiver Jerry Rice and former Green Bay six-time Pro Bowl linebacker Clay Matthews, who will have a conversation while driving the all-new, all-electric IONIQ 5. They will discuss the differences between their career journeys, how the game and their positions on the field have evolved, and how they see the game changing in the future.

“Like the game of football has changed over the years, the IONIQ 5 is an evolution of the automobile to something beyond just another new car,” said Angela Zepeda, CMO, Hyundai Motor America. “We are excited to partner with two football legends, while showcasing IONIQ 5’s futuristic design, innovative technology, and other game-changing features.”

“Evolving the Game” will air during Football Night in America leading into the Sunday Night Football games on Dec. 5, 12 and 19. Long-form episodes will also live on Hyundai’s YouTube channel.

Sunday Night Football has been the most watched primetime TV show for an unprecedented 10 seasons in a row, and Hyundai has the marquee presence leading into the game each week. Hyundai’s presenting sponsorship of the kickoff show features numerous branding elements, including logo animations, in-studio signage and logo placements on the broadcast’s countdown clock.

During the games this season, Hyundai has run a variety of TV spots focused on its all-new Tucson, Santa Fe and Tucson plug-in hybrids, and a campaign with the upcoming “Spider-Man: No Way Home” film.

Hyundai Motor America focuses on ‘Progress for Humanity’ and smart mobility solutions. Hyundai offers U.S. consumers a technology-rich lineup of cars, SUVs and electrified vehicles. Our 820 dealers sold more than 620,000 vehicles in the U.S. in 2020, and nearly half were built at Hyundai Motor Manufacturing Alabama. For more information, visit www.HyundaiNews.com.