Fantastic centuries by Shubman Gill and Rohit Sharma, followed by an impressive outing for the bowlers powered India to a clinical 3-0 series victory over New Zealand with a thumping 90-run win in the third and final ODI. 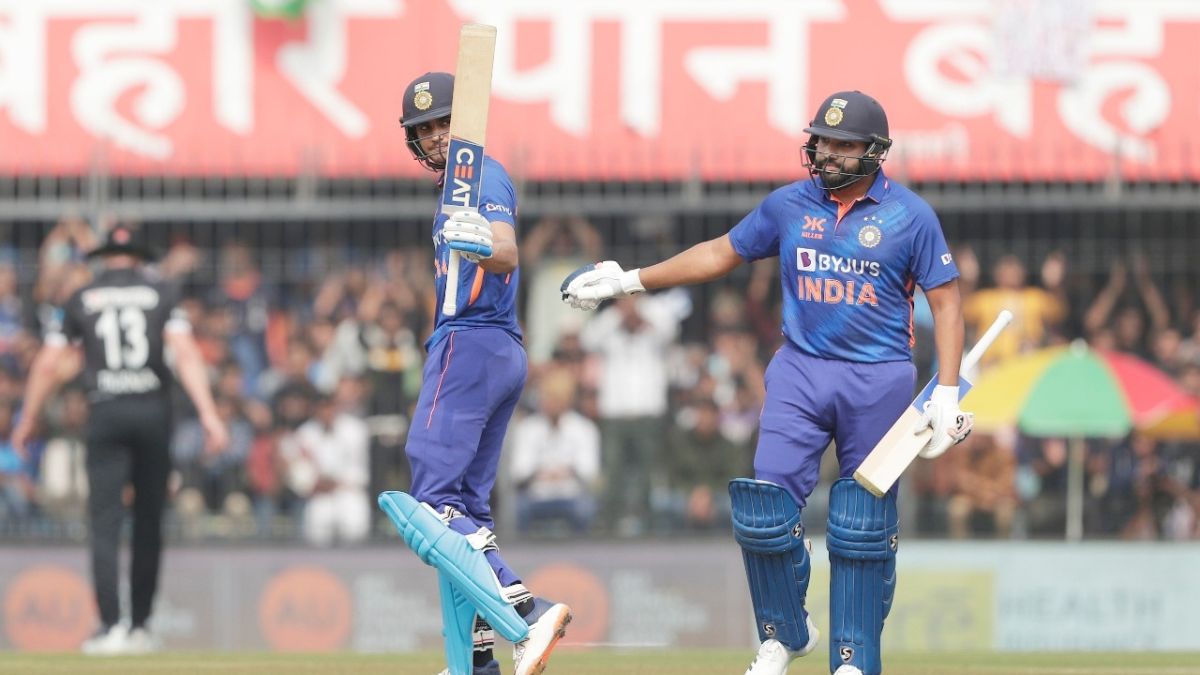 Fantastic centuries by Shubman Gill and Rohit Sharma, followed by an impressive outing for the bowlers powered India to a clinical 3-0 series victory over New Zealand with a thumping 90-run win in the third and final ODI.

India emerged victorious despite a fighting century from Devon Conway at the Holkar Cricket Stadium, here on Tuesday.

With this convincing win, India rose to the top of the ICC Men’s ODI Team Rankings. England, who had gained the top spot merely three days back following New Zealand’s loss to India in the second ODI, are now in second position, with New Zealand slipping to the fourth spot.

Gill and Rohit put on an excellent exhibition of batting by hitting sixes and boundaries all around the park, stitching a stand of 212 runs for the opening wicket. The likes of Virat Kohli (36), Ishan Kishan (17) and Suryakumar Yadav (14) got starts but couldn’t convert them into big scores.

Chasing a mammoth total, New Zealand got off to the worst possible start as Hardik Pandya removed Finn Allen for 0 in the very first over. However, the early wicket didn’t affect Devon Conway and Henry Nicholls much as they displayed a range of shots — drives, scoops, cuts, slashes — in their counter-attacking knocks.

The likes of Umran Malik and Shardul Thakur were put under some pressure by Conway and Nicholls to lead the visitors’ recovery after the early setback, adding 106 runs for the second wicket, before Kuldeep Yadav removed Nicholls for 42 (40) by trapping him in front of the wicket.

Shortly after, Ishan Kishan missed an easy stumping opportunity as Conway got a lucky reprieve on 58 in Yuzvendra Chahal’s over. The left-hander made the Indians pay as he explored all corners of the ground to score quick runs and never allowed the Indian bowlers to get into a rhythm, completing his hundred in 74 balls to push New Zealand on the front foot.

However, Shardul Thakur once again showed his magical wicket-taking ability by scalping three back-to-back wickets of Daryl Mitchell (24), Tom Latham (0) and Glenn Phillips (5) to swing the contest back into India’s favour, leaving New Zealand struggling at 200/5 after 27.4 overs.

The wickets were falling from the other end but Conway kept finding boundaries and sixes regularly to keep the visitors alive in the run-chase. But, against the run of play, Conway flicked one delivery from Umran Malik to midwicket where Rohit Sharma pouched the catch, bringing an end to the southpaw’s splendid knock (138 off 100) in the 32nd over.

From there on, it was a tough task for the remaining New Zealand batters. Michael Bracewell (26) and Mitchell Santner (34) made useful contributions but the duo couldn’t repeat their heroics from the first ODI as the visitors were eventually bowled out for 295 in 41.2 overs.

Earlier, put into bat first, Gill and Rohit gave India a strong start with the short-sized boundaries and flat pitch making their job a bit easier. The New Zealand bowlers were tidy enough for the first five-six overs. However, with the ball hardly doing anything in the air or off the deck, it was just a matter of time before India pressed the accelerator pedal.

In the 8th over, Gill cut, drove and steered Lockie Ferguson all around the park as India collected 22 runs in a single over. Soon, Rohit also joined the fun by pulling and lofting Duffy into the stands to score 17 runs in the over as the Indian opening pair added 82/0 in the first Power-play.

Even after the Power-play, both batters continued their aggressive approach and completed their respective half-centuries. While Gill scored his fifty in just 33 balls, Rohit reached the milestone with a six against Mitchell Santner, scoring his fifty off 41 deliveries.

In search of a wicket, New Zealand skipper Latham tried different options in Daryl Mitchell and Santner but it continued to rain fours and sixes in Indore as Gill and Rohit showed their batting class, reaching the 150 mark of their stand in the 18th over. By dealing in boundaries and sixes, both Rohit and Gill raced towards their 90s very soon and even were competing with each to get to the three-figure mark first.

Eventually, it was Rohit Sharma, who won the race and brought up his long-awaited 30th ODI century — his first ton in 50-over cricket since January 2020 — in 83 deliveries with a single in the 26th over. Gill didn’t have to wait longer as he hit a boundary in the same over to score his century in 72 balls — his third hundred in four ODIs — becoming a run-machine in the format.

At that time, it felt as if India could even reach 450 but New Zealand did well to apply brakes on the hosts’ scoring rate by picking wickets at regular intervals.

After his milestone, Rohit couldn’t continue his innings longer and was bowled by Michael Bracewell while trying to slog across the line. Like Rohit, Gill also got out soon after his century, with Blair Tickner providing the visitors with an important breakthrough.

Virat Kohli looked in fine touch, played a cameo (27-ball 36) and also strung together a partnership of 38 with Ishan Kishan (17) before a mix-up saw the latter being run out. When Duffy removed Kohli, the track slowed down a touch as New Zealand’s into-the-wicket bowling, alongside variations in pace resulted in the wickets of Suryakumar Yadav (14) and Washington Sundar (9), who once again wasted their opportunities in the absence of Shreyas Iyer and Axar Patel.

At that juncture, India needed a partnership and Shardul Thakur and Hardik Pandya did exactly that by playing various ranges of shots — lap, slice, pull and slogs. They strung together a vital stand of 54 in just over five overs to lift the pace again and ensure India finished with a total of 385/9 in 50 overs.