Rachin Ravindra starred with a gritty performance as he saved the test series for the World Test Champions as he scored an unbeaten 18 off 91 balls. 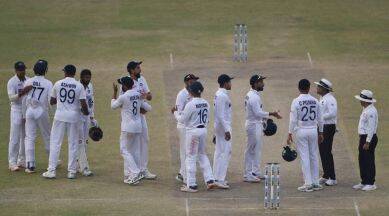 Two Indian-born cricketers, Ajaz Patel and Rachin Ravindra, defied India’s famed spinners in the first Test here on Monday, eking out a dramatic draw for New Zealand in losing light and on a deteriorating track.

The Indian spinners, led by Ravindra Jadeja, produced one of their most tenacious performances in recent memory, but Mumbai-born Patel (2 off 23 balls) and Karnataka-born Ravindra (18 not out off 91 balls) consumed 8.4 overs after the ninth wicket fell to keep the two-match series level.

“We were bowling in excellent spots and knew we had time left, but light would always play a role in the last session. Every day of the match, it happened “Ravichandran Ashwin, India’s senior off-spinner, stated after a long day.

The brave New Zealanders didn’t drop a wicket in the first session of the final morning session before the Indian spinners, who had kept their best for last, finally showcased their skills but couldn’t finish on a winning note.

The draw at Green Park is the first time New Zealand has gone ten Test matches without losing (eight victories, two draws), with the current run beginning against India at the start of 2020.

The Black Caps were inches away from losing this game but the final wicket partnership didn’t let it get away. It was truly a pure show of grit by Rachin Ravindra to save the test match, as he weathered the spinners. India would be disappointed that they were so close to a victory, but yet so far. There is still opportunity for both teams to win the next test and for sure, that will be fascinating to watch.

Ajinkya RahaneDrawIndia vs New ZealandR Ashwin
Share
Subscribe to our newsletter
Get your daily dose of Cricket, Football, Tennis & other favorite sports with handpicked stories delivered directly to your inbox.
You can unsubscribe at any time