India vs Pakistan in 2021 T20 World Cup: Mohammad Rizwan and Babar Azam easily chase the target of 152 Runs, as they win by 10 Wickets

Many records were created in India vs Pakistan encounter, as Pakistan beat India for the 1st Time in T20 World Cup. 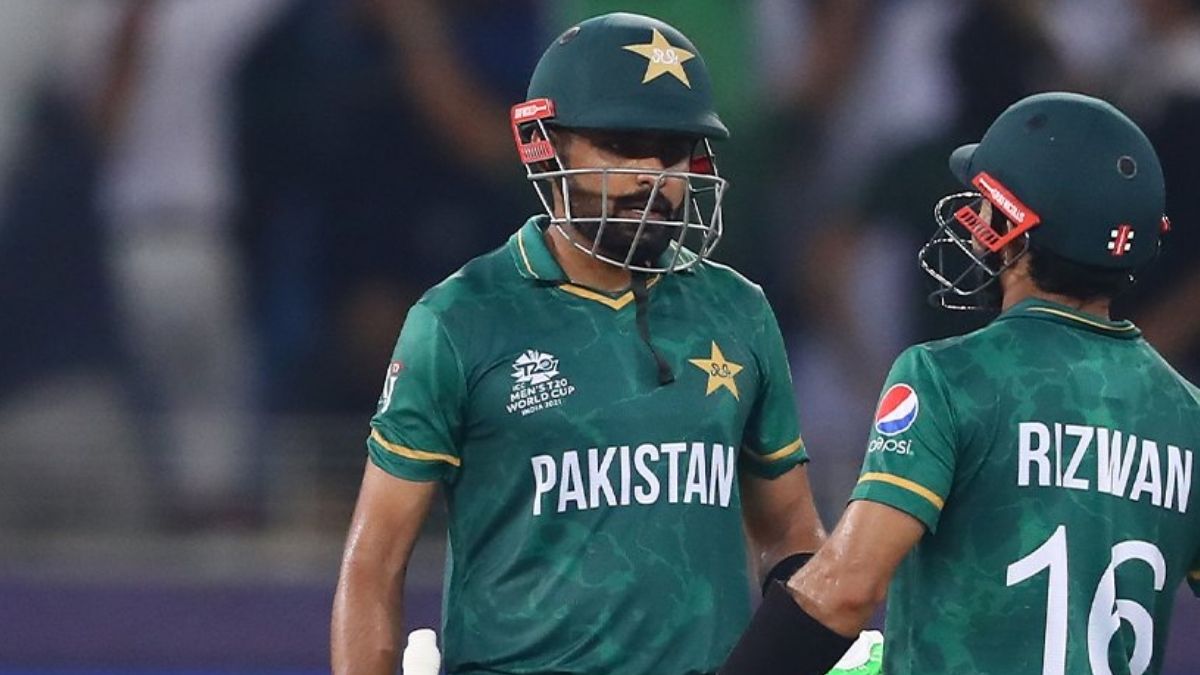 The Super 12 round consists of Twelve Teams divided into Group 1 and Group 2. The six teams in Group 2 are Afghanistan, India, New Zealand, Pakistan, Scotland and Namibia.

Meanwhile, earlier on Sunday, Sri Lanka vs Bangladesh encounter from Group 1 was played. Sri Lanka won that match by 5 Wickets.

As a result, Pakistan for the 1st Time – has won India vs Pakistan encounter in the T20 World Cup. With this, the Head-to-Head record between these two sides is India 5 – 1 Pakistan.

The Line-up for India vs Pakistan

This will be the 200th international match between #India and #Pakistan

What do you make of the XIs? #INDvPAK https://t.co/PCneMMTvSX |
#T20WorldCup pic.twitter.com/0ndEHT2TxH

India was in great trouble as lost both openers – KL Rahul and Rohit Sharma early on. It’s Shaheen Afridi who picked both the wickets. India was at 6/2 in 2.1 overs.

However, another wicket fell for India as Suryakumar Yadav departs after hitting a few boundaries, this time edged it past his bat into the gloves of Pakistan’s wicket-keeper Mohammad Rizwan who does a diving catch. At this stage, India was 31/3 (5.4 overs).

With that, Virat Kohli is joined by Rishabh Pant in the middle. However, the important 53 Run stand between Kohli & Pant comes to an end – as Rishabh Pant hits it straight up in the sky, caught & bowled by Shadab Khan.

Whereas, Rishabh Pant did bat well scoring 39 Runs (off 30 balls), hitting a total of four boundaries. As India found themselves at 84/4 (12.2 overs).

Then, a Captain’s knock by Virat Kohli as he reached his half-century, scored 57 Runs (off 49 balls) with his innings witnessing six boundaries. But Virat Kohli got out as its Shaheen Afridi again who strikes back for Pakistan. India was 133/6 as earlier Ravindra Jadeja also lost his wicket.

Mohammad Rizwan and Babar Azam provided a good start for Pakistan, as they made a 100+ Stand without losing a wicket.

As wicket-keeper – Mohammad Rizwan and Captain Babar Azam both reached their respective half-century. Both Rizwan and Azam hit boundaries in regular intervals.

As a result, Pakistan won the match by 10 Wickets. Thus, the Player of the Match was awarded to Shaheen Afridi for his bowling spell of 3/31.

Records created in this Match:

With this, Pakistan beat India for the first time in the T20 World Cup.

Meanwhile, for the first time – India has lost a T20I by 10 Wickets.

Mohammad Rizwan & Babar Azam’s partnership of 152 Runs is the Highest Partnership against India in Men’s T20Is.